This weekend was pretty much all about Coleman. He turned 11 on Friday. His first treat was a half day at school, followed by lunch, a movie, and shopping with Grandma (a birthday tradition). Coleman had a friend stay over all weekend. Saturday brought three other boys and their families, air soft wars at the park, cupcakes, family over for dinner, gifts, and more dessert.

Coleman said it was the best weekend ever, so I’d say it was a success. There was no theme, no treat bags, no big excursion anywhere. Just a lot of sweaty boys running around outside and playing video games. Easy.

Coleman is a little taller, a little smarter, a little older, and just as witty as ever. So, in honor of Coleman, I leave you with some quotes from this past year.

“I’m not into politics.”

“I’m trying to replace seriously with literally.”
“I would be so pissed if someone stole my knives.” (this one was followed by a look that said I kind of know that’s not a word I should say, but I thought I’d try it out anyway.)
“These tomatoes are good. Are they from France?”
Charlie: “I don’t know how to end my essay.” Coleman: “End it with something snappy.”
Charlie: “It seems like girls don’t fart.” Coleman: “Oh they do, they just wait till no one else is around.”
Charlie: “I need another name for a highway for my candy island project.” Coleman: “How about nauseous highway.”
“Charlie, Burgermaster isn’t a work out place, it’s a fat place.” 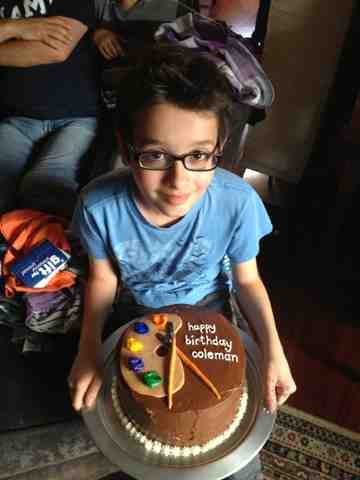 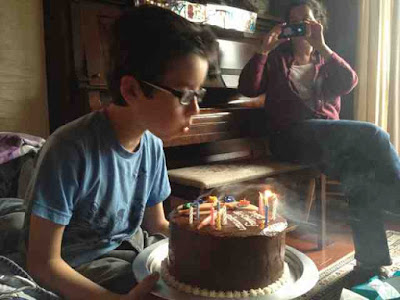 I realize that I’m a week and a half past Mother’s Day. I have four kids. That’s my new excuse for everything. I wanted to say thanks to my mom. Thank you for teaching me to:

dress up when traveling on an airplane

hold my babies tightly and thank God for them

get dressed and put on a little makeup everyday

…and all this while raising five kids. You are a classy lady and I love you.

Sometimes I say yes to more than I should. Sometimes I take on tasks which are more involved than what I originally thought. Maybe this is because I’m a people pleaser. Maybe it’s because I like to stay busy. Or maybe it’s the self confidence that my dad instilled in me. Either way, it’s a blessing and a curse. Don’t get me wrong, I have plenty of insecurities, but there are many situations I go into thinking I got this. How hard can it be? My dad taught me to dive right in, give it all you got. Don’t do anything half-way. All or nothing.


Example 1:
I took an art class. I come from a family of artists and my 9 year old son could create beautiful artwork, why couldn’t I? I lasted two months. I produced art that looked like a 3rd grader’s. I discovered I am not an artist.

Example 2:
I directed a children’s musical at church. I was miserable and I think the kids knew it. This undertaking required calling in support from my dad to help me construct a paper-mache camel head. Don’t ask. Somehow I lasted through the performance, but I definitely didn’t win an Oscar. I am not a theater director.

Example 4:
I was in charge of all the decorations for our church’s vacation bible school. I transformed (with the help of many volunteers) 8 rooms and a sanctuary into a tropical rain forest. I took it very personal when the fog machines didn’t work. I lasted through the end of VBS and vowed to never do it again. I am not a decorator.

But my most recent endeavor beats them all. I agreed to cook four meals for a women’s retreat at another church. How bad can four meals be? Well, when you’re cooking for 110 women, turns out it can be bad. I started getting nervous about 20 minutes after I committed to it. But once I say I’m going to do something, doggone it, I’m doing it.

The maximum amount of people I’ve cooked for is 30. Others told me it’s not that big of a deal to cook for more. TRY 80 MORE!! Those people lied. It is a very big deal, even if you have several amazing volunteers to help.

When I walked into the kitchen and started figuring out how I was going to begin to cook 15 pounds of cut up chicken, I began to get that feeling in my stomach. You know the one. The same feeling you get as you are slowly creeping up to the top of a roller coaster and you’d suddenly give your right arm to get off that thing. I wanted out. Not possible. I was doing this.

My friend Vicki, was the guest speaker and feeling the same way I was, as this was the first time she had spoken at a retreat. As we talked on the ferry ride over I was still pretty optimistic. “What’s the worst that can happen? The food tastes bad, or I run out of food.”

Well, the worst happened. I ran out of dinner the first night with 20-25 people anxiously waiting for the chicken stir fry as promised. What they got instead was leftover soup from lunch over rice or even better, a frozen pasta dish reheated. To say it was a bummer is kind of an understatement for me. I was horrified. I realize there are bigger problems in this world, but in that moment I could think of none. I was hired to do a job and I failed. Who cares if it tasted delicious if 25 people were only hearing about it while chewing on their reheated-less than flavorful-frozen dinner.

The women were gracious. Everyone was fed…something. The world did not end, however, the life of my twice applied deodorant did. We all survived. We did not run out of food for the next two meals. The women enjoyed what they ate and I was humbled.

Would I cook for 110 people again? Heck no. But will I say yes to something I’m not sure how to do and get in over my head again? Most likely. Old habits are hard to break.

Last month I was sitting around in a hotel room in Las Vegas, with my siblings, discussing plans and options for a family reunion next year. What started as a discussion, quickly turned into each of us expressing (in a somewhat raised voice) how busy we are and we don’t know if we can make it work, afford it, plan that far in advance, etc. There were all sorts of excuses as to why we could or couldn’t make it happen. We’re dealing with a missionary, limited vacation time off work, different school schedules, babies and future babies being born, and worst of all…a rock star. This makes for a big challenge when it comes to planning anything. This was, in fact, the first time we’d all been in the same room in four years.

Jason reminded us (for the 47th time, at least) his family are missionaries now and can’t afford much. Jeremy was anxiously awaiting the arrival of his second daughter. Jillian (always the organizer) was pleading with everyone to make it work. Joey (the rock star) made it clear that he could commit to nothing because who knows on what stage, in what city he would be playing in.

“Hold it right there,” I said. “You’re not the only one with gigs around here.”

Everyone looked at me and laughed.

There you go. If I can juggle four kids AND two gigs and make time for a family reunion, then so can they.

See you guys at Bear Lake.