DAY FOUR (OR FIVE, SOMEWHERE I HAVE LOST A DAY. LET’S JUST SAY FIVE) Thank goodness Judah woke up back to his normal self. We had to get up early…and I was so worried about sleeping in…definitely has not bee a problem! I woke up at 4:00am again. At least this time I felt well rested. After breakfast we met at a different hotel to get on a tour bus. This bus took us to a city called Ayutthaya. It was really cool to see other towns and places. We stopped a few different times to look at different temples. It really was fascinating. Then we ended up on a boat to travel back. The boat was great and they served a huge buffet with very good food. The kids loved all of it. When we finally reached the hotel we started at, we split up into two taxis. One had Andy, Charles, Edmund, Judah and Josie and the other one, the rest of us. Well, we didn’t check to see if our driver knew where our hotel was and we really should have. What should have been a five minute taxi ride ended up being about an hour and a half. Our driver had no idea where we were going and he didn’t speak any English. Sarah and I felt like we were on The Amazing Race. It felt pretty helpless. Our driver stopped and asked three different people for directions and then at one point he just wanted to let us out to find our own way, but Sarah said no, you need to take us to our hotel. I think ‘no’ was the only part he understood, but he stopped one more time and this time found the way. Of course we finally made it to a very worried Charles waiting on the front step of our hotel. Well, we had an adventure and the boys and I composed a little song called, “we’re stuck in a pink taxi…” I’m sure it will be a hit one day. The boys were excited to eat at McDonalds for dinner, as was their dad. They are doing so well and I am so proud of them. I am exhausted and it is only 8:45pm!

Granny and Charlie on the tour bus

Riding in the back of the golf cart. Charlie was very excited he got to drive it, until we realized there was a fine of 1,000 baht for kids under 16 driving. 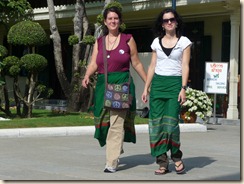 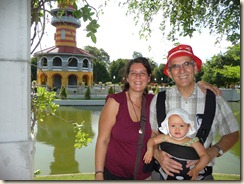 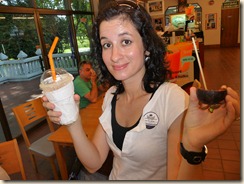 Enjoying my mango shake and some mangosteen 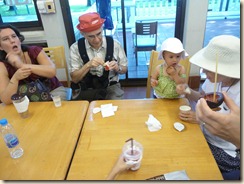 A break for ice cream 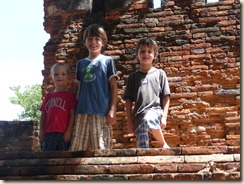 The boys climbing on the temple ruins 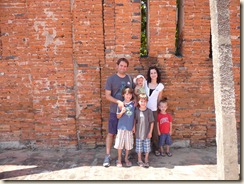 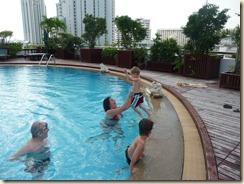 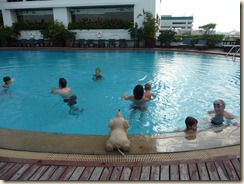 …the calm before the storm… 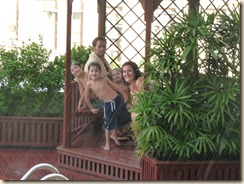 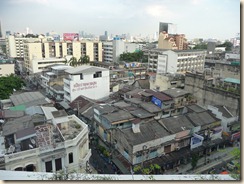 The view from the pool at our hotel in Bangkok. 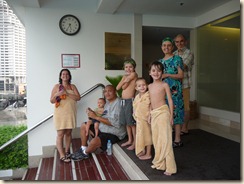 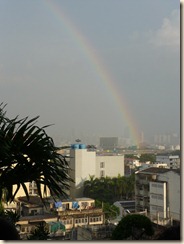 The rainbow after the downpour. 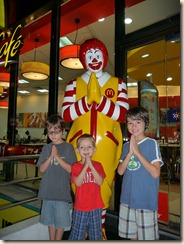