“Coleman’s” insect projectColeman has been researching the house fly for his insect report for school. He is learning fascinating facts such as the fly vomiting out food and then sucking it back up through his “sucker”. So the assignment reads like this in a note from the teacher:These insect reports will require a 3D model of the specific insect using any materials of their choice. This may include clay, paper or any household items like egg cartons or pipe cleaners. It is up to the student’s imagination.Somehow I must have read “it is up to the parent’s imagination…or more specifically, Jen’s imagination”. And so it began. My ideas of what a house fly should be. Of course I tried to get Coleman involved…Andy too and they did contribute. But when it came down to it, I had something specific in mind and I really needed to let my creativity show. I just knew that Coleman would have the most creative model…EVER! And in an instant I became that annoying parent that takes over and tells their child how it should be done. I am not proud of it. Now it’s not that Coleman wasn’t willing to help. The poor guy tried, but things just weren’t working out the way I had dreamed up in my mind. Coleman came home and said that kids were starting to turn in their models. Some were made of clay, some egg cartons and some of gummy bears. Really? Gummy bears? Oh please. The Hirschman’s are much more capable than smashing together some gummy bears. So now it is finished. And I am a little sad that it hardly looks like what I had originally imagined. Oh the dreams I had for that little house fly. And as I made Coleman sit there with me to “help” on his project he looked at me and said, “it looks more like a spider”. Ouch, that hurt a little. I must learn my lesson from this. No more. I really should have just coughed up a few bucks at the craft store for some clay and let Coleman have at it. He is, after all, the artist. I’m sure my parents are wondering where all this creative determination was when I was in 2nd grade, and the rest of my school years. I’m a late bloomer…what can I say. 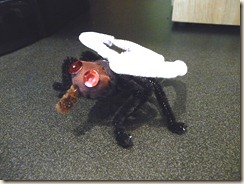 For the record, Coleman did shape the legs and wings and glue on the eyes and wings.