This is anniversary number twelve for us. Though it has gone by fast, it is getting harder and harder to imagine day to day life without each other (and our four little offspring). We had a great night out by ourselves, just gazing into each other’s eyes…ah, romance. And looking across the table I realized how glad I am that I still like this person. That may sound weird because I more than like him, I love him. But liking is a good thing too. I enjoy being with him. He makes me laugh. He is understanding even when he doesn’t understand me. He is many things. Too many to list. I once heard a man who had been married for 35 years say that the honeymoon never ended. First, I thought, he’s lying. And second, who really wants a 50 year long honeymoon? I think back to that first year and remember some really great times, but there were some really rough times. Times where I thought to myself, “I don’t want to share. I don’t want to sacrifice. I don’t feel like being nice to this person.” These things that came so natural on our honeymoon suddenly went against every ounce of my being. But after remodels, miscarriages, four births, sickness and health and all that’s in between. We’re still here, still together, still driving each other crazy, still making each other laugh and still loving each other all the more. 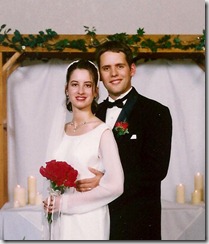