In some ways it’s hard to believe he’s five already, but in other ways not so much. He’s packed in a lot of livin’ in those five short years. He’s a cowboy, a ninja, batman, Spiderman, buzz lightyear and currently Zorro. Yes, it’s all about Zorro right now. The party was great fun. Judah is so happy which makes everyone happy. Judah makes anyone and everyone smile. Someone once asked me if I let him wear his costumes everywhere we go. Of course! He has no qualms about strutting down the mall in full Zorro costume, mask included, with the intensity of heading off to a duel with his archenemy, Don Rafael Montero. I love the looks on people’s faces. Be it a bratty-too-cool-teenager or a grumpy old man, they will smile as they pass my little Zorro. They have to. No one can help it. I love this about Judah. So, for your reading entertainment, I leave you with some quotes from the ever witty Judah Eliseo.   Jen – No, you can’t do that Judah. Judah – Can you just say, “I guess you can do that.” Jen to Judah – Judah, you need to get in your car seat and buckle in! Why are you always the last one to get buckled when you are the first one in the car? Judah – (big sigh) I’m trying to handle it! You look so awesome Mama, with your headband, earrings and sunglasses. Your coat is not awesome, but your boots are awesome. As soon as we get home I really need to put on some deodorant because my pits are very stinky! Judah – Cowboys don’t have moms. Jen – Of course they do. Everybody has a mom. Judah – No they don’t. I never see them in the movies. Jen – Judah, you need to put your clothes away before you watch a movie. I forgot to tell you that earlier. Judah – You did? I wish that you forgot to tell me that and then never remembered at all to tell me. Apparently, I don’t like Thomas the train anymore. Jen –You need to bring in your toys from outside. Judah – That’s asking too much of a man! (While camping and it’s starting to get dark) I’m a little scared. I have a gun, but it’s not real. Guess what? You can’t open up the toy gun and take it out of the package in the store cuz it’s illegal. I read that in a book. It was an American book. I guess it’s time for me to dress up like a cowboy. I’m guessing you’re making me carry all this stuff without any help. (His comment as he is gathering up all of his accessories from the car) Judah to Jen – So…we need to talk about something. You said you would dress like a cowgirl and you aren’t doing it. (After Charlie asked him to turn off the VCR) I have no idea what that even is. Jen – Judah, I can’t believe you’re turning 5 tomorrow! Judah – Don’t worry, I’m still going to wear all my costumes. By the way, thanks for my birthday cake. (Morning after his birthday) 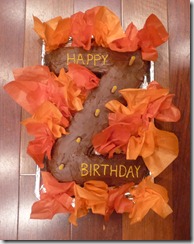 The Z is for Zorro, of course 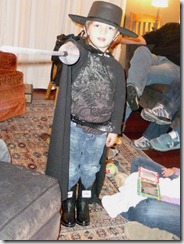 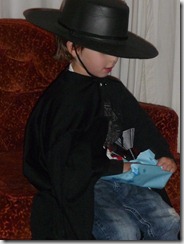