I should have posted this last month. I really don’t like going out of order. But that’s just me being obsessed with order. September 16th was a very big day for me. I went to a concert. Not just any old concert. I went to see Amy Grant. I have been to several Amy Grant concerts before, so while this was special, it is not unheard of. What is unheard of, however, is the fact that I, Jennifer Jo Hirschman, had the privilege of meeting face to face with Amy Grant. Real life. Not just in my dreams. For reals.I know I sound like a weirdo, but I really do not care.   I have been a fan (borderline obsessed) of Amy Grant’s since I was about 8 years old. And by obsessed I mean bought every tape (that’s right, cassette tape), album, CD she has made. I also spent many hours cutting out any picture I ever found of her and carefully taping it on my wall. And even more hours were spent holding my hairbrush in front of the mirror singing Father’s Eyes, El Shaddai, Love Will Find a Way….the list goes on and on. I’m embarrassed, but I wanted to sound like Amy, dress like Amy…pretty much BE Amy Grant. So on September 16th, 2011, my dear brother, Joey, made my dreams come true. First off, he got my sister and me free tickets to see Amy Grant at the Puyallup Fair. That, in and of itself, is exciting. But, because of his musical connections, he got us tickets for a “meet and greet” with Amy herself. I will spare you all the boring details of what was going on in my mind that day…that week. But, if you can’t already tell, I was in heaven. This seriously was a dream come true. I totally tried to play it cool, and I like to think I did alright. But inside I was like a giddy little girl meeting her idol. It was grand. She was just as nice as I always thought she would be. She did not, however, ask me to sing back up for her which was a slight disappointment. But it was great. Really great. She made everyone in the little tent, all 25 of us, feel as though she would love to sit down and have a long chat over dinner if she had the time. Maybe she’s just good at what she does, but she seemed very sincere and I was very happy. So thanks to my brother who made my dreams come true. He made fun of me so many times growing up, but when it came down to it, he knew how special it was to me and he gets it. 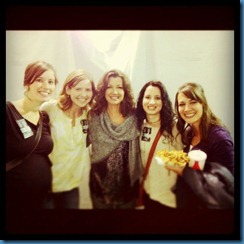 Yep, that’s me standing next to Amy.
I like to refer to her by her first name now.