Halloween is really just an introduction to two solid months of a candy free-for-all. The loot from Halloween carries the kids through to Thanksgiving which is a nice segue into the Christmas season. After about December 15th it’s all down hill, sugar wise.   Several years ago, the kids wanted fancy costumes, translation-expensive. I spent much of my month of October trying to convince them why it is so much better to make a homemade costume. I guess my convincing finally worked, but sort of came back to bite me in the end. I forgot that in the process of them creating amazing ideas for costume, I would be the one running from thrift store to thrift store collecting size 10 teal pants and purple pants that can be hiked up to one’s chest. It all worked out somehow and I might have ended up spending more money than I would have at Target. Oh well, they got creative…enough said. (Josie did not create her own costume. The Disney Store did…compliments of Grandma) 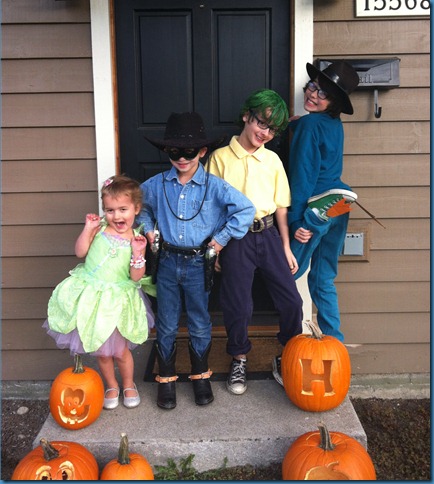