My mother’s day began slightly earlier than I would have preferred, however, I was greeted in bed by my two oldest and the cutest girl in the entire world bringing me waffles. The oldest making sure I understood that HE was the only one who actually did the work of removing the waffles from the package and placing in the toaster, while his brothers just slept the morning away. A very sleepy Judah quickly followed. Coleman gave me not one, but two cards! That’s right two! Charlie must have gotten distracted by all of his furious waffle making because he informed me he didn’t have time to finish his card for me. Somehow he managed to squeeze in enough time to catch episodes 42 and 43 of Phineas and Ferb. Judah insisted he did make me a card but he just lost it. Charlie tried to help Josie make a card but she didn’t want to. After my second bite of waffle, the kids decided they were hungry too and finished them off. After church we went to have lunch with my dear mother who I’m sure never had any such experiences on mother’s day with any of her five precious children. As we sat to eat lunch, her husband Lorne came up with a brilliant idea of asking the kids to share one thing that they were thankful for about their mom. Now this is a nice idea I thought to myself. Enter huge expectation of what wonderful things my sweet children might think up…. Charlie – Ummmm…she gave birth to me? Judah – She buys me toys, well, sometimes. Coleman – She bought me this shirt. And now enter my scolding of ‘why after all I do for them, this is what they come up with’. They all just looked at me with these looks on their faces that, to me, said “What do you expect mom? We’re only kids. We’re only almost 11, almost 9 and 5”. And it’s true. I guess I was thinking of something more along the lines of “I am so thankful for all the times when you show me how much you love me by doing my laundry and cooking me amazing dinners night after night. I am thankful that I have a mom who loves me so much and tries to make things special”. Yep, way too high of expectations. We had a nice time at my mom’s, which included an impromptu visit to a nail salon for pedicures for all the moms…greatest idea ever, Jill. And then we finished off the day with a lovely dinner out with Andy’s parents to celebrate his mom and her birthday of which number I will not say. I looked around the table at my oldest who was rattling off trivia about the restaurant, my second with his messy hair drawing a maze all over his menu, my third scraping two knives together like he was ready to skin some wild animal, and my littlest one scooping up butter in handfuls and eating it with the hopes that no one would catch her. I love these little crazies. And I know they love me. And I know they appreciate me in their own little ways. Just like I appreciated my mom when all I could come up with was some little packet of seeds (given to me by my teacher) to plant in a garden which she didn’t have. But one day, I saved up my money and bought her a sweater and skirt. I was so happy on that day when I could really show her how much I loved her with more than a homemade card. Maybe that day will come for me. It’s probably only about 15 years away. That’s not so bad. I did find Judah’s card crumpled up under the couch a couple of days later. Happy Mother’s Day to me! 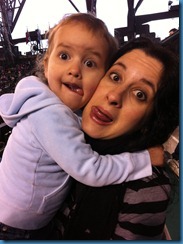 At a Mariner’s game 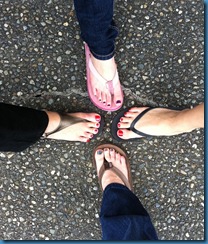 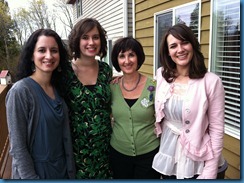 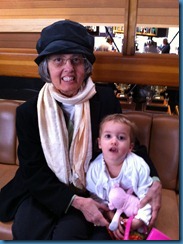 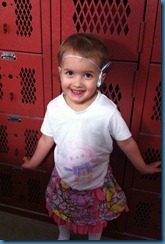 Josie and her new favorite accessory