You heard correctly. Coleman is now nine years old and the proud owner of a pet lizard. He has been talking about wanting a pet lizard for awhile now, but it became a reality thanks to his awesome aunts and uncles. Lenny is his name. And he is fast, as my dad found out when he tried to transfer him from the little container he came in to his tank or “habitat” as Coleman reminds me. Lenny made a break for it during the transfer and I do have video of four adults surrounded by children down on all fours attempting to coax this little reptile out from the piano. Eventually he was caught and is now adjusting well to his new “habitat”. The great news is that he eats live crickets. And since live crickets like to jump and scurry pretty quick themselves, guess who has to feed the lizard the live crickets so as to avoid crickets being scattered all over the house at 10 cents a pop? I’m so lucky! I suppose it’s my own fault for agreeing to invite this creature into our house.   So between the lizard fiasco, and then a little break from the party to attend Charlie’s band concert, we had a great time celebrating Coleman. Coleman is currently enjoying Tom & Jerry episodes, family, watching his lizard, reading, orange tic tacs, drawing mazes, gardening, church and making us all laugh with his quick wit. 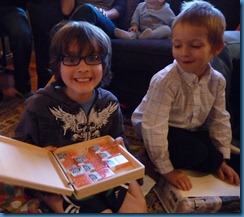 His own stash of tic tacs! 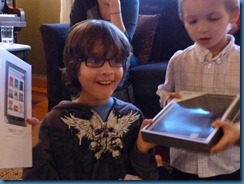 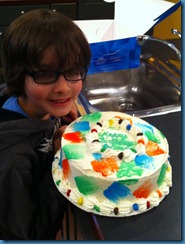 Eyes are closed, but who can tell anyway with all the hair!